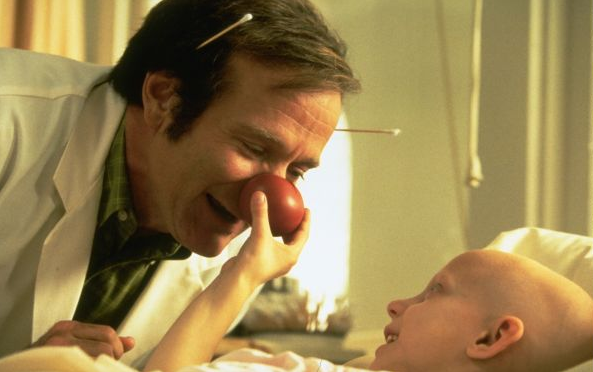 When I think about the actors, political figures, literary figures, musicians, etc. that the kids these days have to look up to I get sad. I was born in 1990 and I find myself thanking my lucky stars for being given that experience. Everything that I had from the Disney movies to songs that are today’s classics I have held close to my heart and cherished. Robin Williams and his movies are a huge part of my childhood. Jumanji, Hook, Flubber, Mrs. Doubtfire, Dead Poets Society, the list is never-ending. Even writing this makes me feel heavyhearted. I have to tell you I am not a very emotional or overly sensitive person, so the fact that this person’s death has this affect on me is significant.

You’re only given a little spark of madness.

You mustn’t lose it.

I don’t know what it was about Robin Williams but he touched people in a way that I haven’t really seen from any other actor. He was funny, definitely, but his humour evoked so many more emotions. Whenever I watched Robin Williams I always felt like he was not just making me laugh but that in exchange for truly instilling joy in me, even temporarily, he was burdening himself with my pain. I’m not talking about me just unconsciously transferring my sorrows onto him I’m saying he wanted it. As if he was doing me a favor, he was going to make me laugh, truly laugh, but he wanted me to experience that in its purest form, without anything else to focus on. 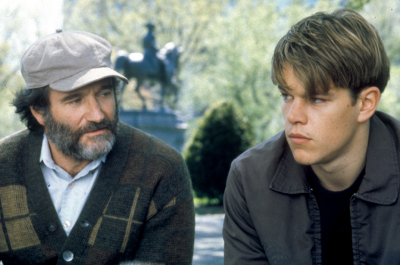 This past July Matt Damon participated in “Ask Me Anything” discussion on Reddit. He proceeded to recall some memories of Robin Williams from the set of their 1997 movie Good Will Hunting:

“Working with Robin almost defies description. He was one of the most generous, loving, wonderful people I’ve ever met. He had this capacity that I’ve never seen on a movie set. When everyone started to get tired and started to flag a little bit, he would launch into standup. We knew it was original because he was making fun of crew members and pulling them into these bits. It was like 15 minutes of the best stand-up ever that was just privately for us. Everyone would laugh and laugh and laugh and then everybody would get this boost of energy and go back to work. I’ll never be able to thank him enough for what he gave us. In my heart, that’s where he is, as this person that I’m deeply deeply grateful came into my life and changed it for the better.”

Everything I have ever read about people describing their experiences working with Robin Williams all sound like Matt’s. He made a difference in people’s lives. It is extremely saddening to me to know that this person who gave so much to us, so much happiness, was himself trapped inside a thick and swarming depression that was with him until his end. Along with his depression his widow has recently revealed that Mr. Williams was suffering from dementia with Lewy Bodies. In the year before his death he was slowly deteriorating and this led to his breaking point. Susan Willaims acknowledges that the beloved actor “was well aware he was losing his mind, and tried to keep it together until” the day he took his own life. She had noticed that “his chronic depression had returned along with his paranoia.” It actually causes me grief to know this of him. 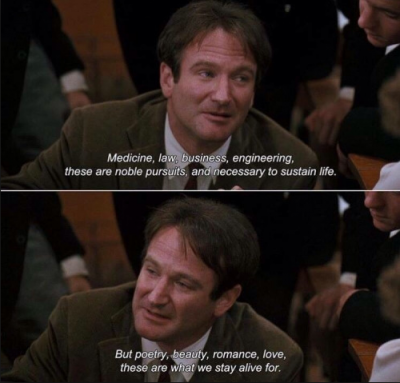 I myself have suffered from chronic depression and paranoia my entire life and it is crippling. I can’t even imagine dealing with those along with being diagnosed with Lewy Body Dementia and Parkinson’s.  I struggle with understanding why this sensational soul who gave us light and laughter was suffering in the way he was. In the 1996 movie Jack, Williams character gives his high school graduation speech to his fellow students:

“Please, don’t worry so much. Because in the end, none of us have very long on this Earth. Life is fleeting. And if you’re ever distressed, cast your eyes to the summer sky when the stars are strung across the velvety night. And when a shooting star streaks through the blackness, turning night into day, make a wish and think of me. Make your life spectacular. I know I did.”

I always like to think that these lines came from Robin’s own soul. That in his movies, he was giving parts of himself to us for us to keep forever. I recently went to New York where I visited Gotham Comedy Club. The halls leading to the entrance of the venue are lined with pictures of different comics that have performed there. As I walked in I looked up and was startled by the intense emotion I was hit with when staring at Robin Williams’ loving face. He made me laugh and he made me cry like nobody ever has but the biggest thing that Robin Williams left me with is understanding the power of kindness. Mr. Robin Williams thank you for changing so many of our lives and giving us some of our best memories. You will never be forgotten.