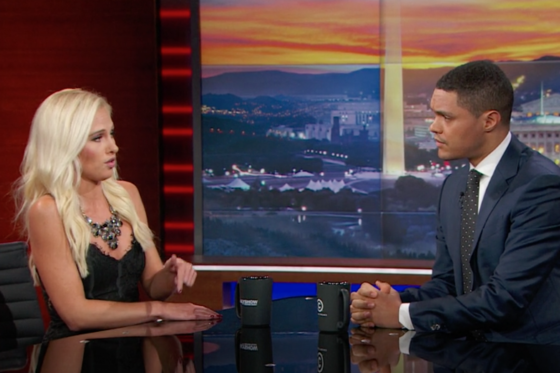 Trevor Noah's Face Off with Tomi Lehran on The Daily Show

Tomi Lahren, host of TheBlaze, stopped by The Daily Show yesterday and chatted with host Trevor Noah on a variety of controversial topics like the 2016 presidential election and the Black Lives Matter movement.

It didn’t take long to see that the two hosts hold opposing views on almost everything. When Noah brought up what a Trump presidency could mean for women in the United States, Lahren suggested that a Clinton presidency would not be better, stating, “What he said…it’s not defensible, but I”m still comparing someone who said some nasty things to a woman that has done nasty things.”

When Tomi criticized Colin Kaepernick’s form of protest, Trevor asked what exactly “the right way” for a person of color to protest was. That question remained unanswered.

See the full interview below: