Are you sick of being sick? What if I told you that the healthiest countries in the world were ranked according to long lifespans, low blood pressure, low cholesterol, low chance of communicable diseases, lack of obesity, and other similar factors and the U.S. was not one of these? One of the most prosperous nations in the world that hypes an “American Dream” is quite unhealthy compared to many other countries.

It appears that Italy comes in number one as the most healthy country in the world. This achievement is most likely due primarily to their diet of seafood, vegetables, and olive oil (although not the healthiest oil it contains many healthy fats). Of course with a diet like this, you tend to have less obese people as well. The country is known for sharing with the world its incredible pasta dishes and pizza has outranked the U.S. in healthy inhabitants. They also take the cake, but then don’t eat it, when it comes to health risk penalties; this means that they have the highest positive score of any nation, but they also have one of the lowest health risk scores as well. While the U.S. has a health risk penalty of -5.21, Italy has one of only -4.33.

The top ten including Italy are Iceland, Switzerland, Singapore, Australia, Spain, Japan, Sweden, Israel, and Luxembourg. It is interesting that seven of these nations are known for eating seafood, vegetables, and olive oil. It is also interesting that the only Near East nation that makes the top twenty-five is Israel while Cyprus ranks at eighteen. Cyprus is actually a Mediterranean island that is historically Greek in persuasion. Being relatively close to Turkey it does contain a significant Turkish Muslim population, but its culture is a strong majority of Greek and Eastern Orthodox Christianity. Near Eastern nations begin to show up when we come to ranks thirty through fifty. Lebanon takes the position of thirty-two (higher than the U.S. at thirty-four), and Qatar at thirty-six and a few others follow it. Also interesting is that Israel, Lebanon, and Qatar border the sea giving them a large sea-food diet at their disposal.

While Chile ranks highest for any Central or South American nations at Twenty-nine, joining not far behind is Cuba, Costa Rica, Uruguay, Barbados, and Panama for countries south of the U.S. For all that would be expected Mexico, nor Brazil, do not make the top fifty. This news may come as a wake-up call for many Americans, both South of the border and U.S. Citizens. Maybe the American Dream that promises wealth and a better quality of life is at the heart of making its own people more unhealthy with shorter life spans. We could speculate all day on why this may be, but individuals that strive for material success often deal with depression and stress causing them to take their hard earned cash and purchase unhealthy but enjoyable indulgences. Although, this argument is often used in the case of the frequently unhealthy poor for the same reasons. So watch your diet and eat healthy food! 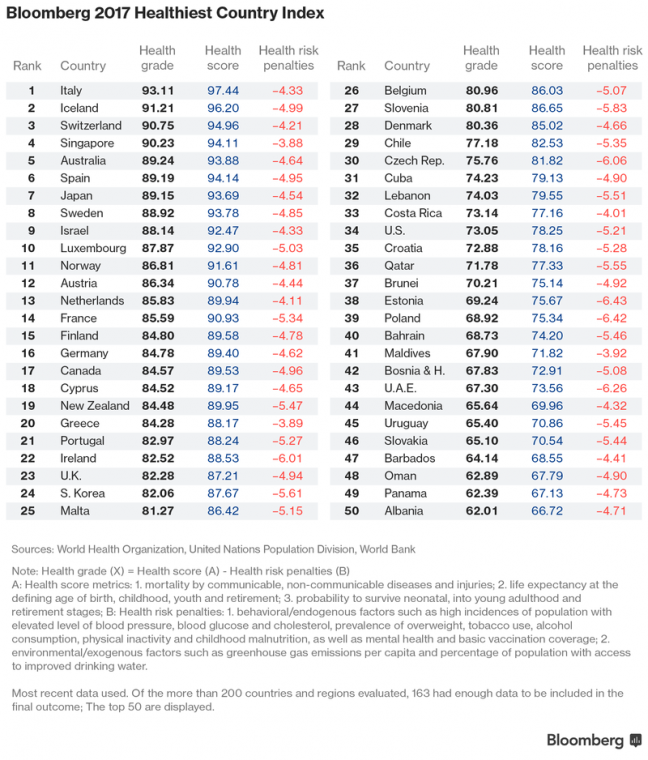