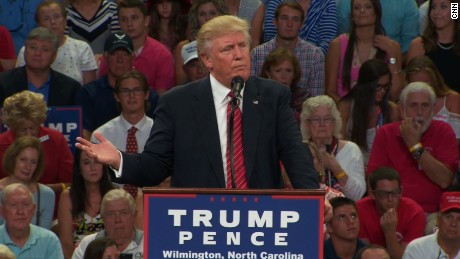 Trump on the “Second Amendment People”

Presidential nominees Donald Trump and Hillary Clinton have yet to take the debate stage, but Trump, as expected, is already giving the public something to talk about. Yesterday, Trump commented, “Hillary wants to abolish - essentially abolish the Second Amendment. By the way, if she gets to pick her judges, nothing you can do folks. Although the Second Amendment people - maybe there is, I don’t know.”

Many were appalled that Trump would suggest violence as a means of keeping Hillary from appointing judges, but Trump responded that he was only referring to the group’s political power. Team Hillary wasn’t so quick to accept his explanation though. Robby Mook, Clinton’s campaign manager, stated, “This is simple — what Trump is saying is dangerous. A person seeking to be the President of the United States should not suggest violence in any way.”

The NRA, staunch Hillary opponents, showed their support for the Trump campaign following his statements

They followed up this tweet saying, “But there IS something we will do on #ElectionDay: Show up and vote for the #2A! #DefendtheSecond #NeverHillary”

Senator Elizabeth Warren, never one to shy away from calling out Trump, also took to Twitter to respond

No apologies from the Donald though, who instead blamed the media for twisting his words

Mike Pence showed his support for his running mate, telling reporters that Trump “of course” was not suggesting violence against Clinton. We’d like to think that he’s right, and that the GOP nominee running to become the President of the United States of America would NEVER do such a thing.  No response yet from Clinton herself.