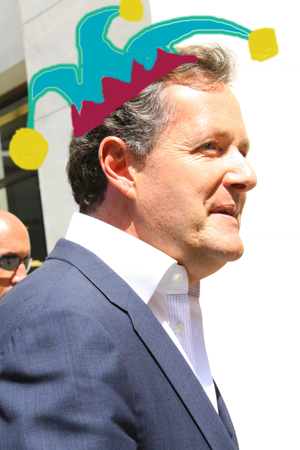 Journalist (questionable), tv personality (bore), and failed Larry King wanna-be Piers Morgan is at it again. Morgan has a tendency to give his two cents on matters that have absolutely nothing to do with him, not to mention no one ever actually asks for his opinion, ever. With a constant stream of diarrhea coming out of his mouth, it seems that Morgan is a spotlight hungry troll (with an accent) that will say anything just so that we don’t forget his name. If I didn’t know any better I would say that Mr. Piers Morgan has been taking classes taught by Kris Jenner on “how to stay in the media.” Morgan’s name has reappeared this past week because he has chosen to make fun of the way India is celebrating its win of two medals at this year’s Olympics. What a class act. Folks take a look at Morgan watch him, analyze him, take notes, he is everything us Americans should strive to stay away from.

Not only did Morgan make fun of India only winning two medals but he pointed out the fact that neither of them were even gold. I have an idea, how about Morgan participates in the 2020 Olympics and if he can even bring home a golden chocolate coin (for being an asshole) I will get our hero’s face tattooed on my arm. This wouldn’t be a Piers Morgan story if it didn’t end with him fighting with someone and in this case the winner is Indian author Chetan Bhagat.

Country with 1.2 billion people wildly celebrates 2 losing medals. How embarrassing is that? https://t.co/FYSBM7ErAf

And this is where Mr. Bhagat decides to interject...

What is hilarious about this exchange is that they tweet back and forth a couple of times after that, misspelling each other's names and then correcting the other, apologizing, just a bunch of weird BS. The internet saw this and decided they wanted to make this a THING, and that's how Chetan & Piers: A Love Story was born.

Peirs and Chatan. A match made in heaven.

Seriously hilarious. Here are some other people Piers has had "feuds" with: **Chrissy Teigen & John Legend**

No, my little bundle of hypocrisy, YOU'RE using ME for clickbait. Now hush before your sanctimonious spleen bursts. https://t.co/Cm4A3uKxXW

@piersmorgan you're right. It's ME who writes weekly columns demeaning and criticizing women and black people. All me. Goodbye, King troll.

Someone anyone...hand me the popcorn and leave me be.

Would Susan Sarandon wear this to a funeral? No. It was thus horribly inappropriate for an In Memoriam tribute. pic.twitter.com/hMoGChJY8D

I know the old man's $50 million in debt, Kim - but this is absurd. Want me to buy you some clothes? https://t.co/hEA9osB2QF

Do you want me to buy you some clothes? You look freezing. https://t.co/FHXB1U50f6

@piersmorgan thanks, but I don't need clothes as much as you need press.

Why is he always commenting on women needing clothes...

And it doesn’t stop there!