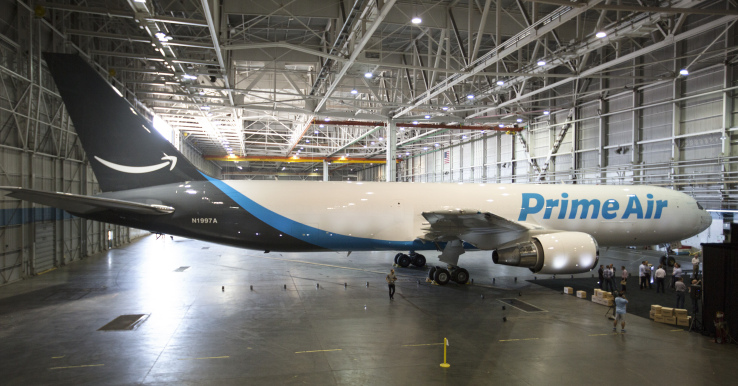 Amazon has unveiled its own dedicated cargo planes called Prime Air. The first plane is operated by Atlas Air and is a Boeing 767-300. While this first plane has already gotten users talking about what Amazon has in store, they can expect to see many more. The company is set to lease 40 planes in total over the next two years from its partners ATSG and Atlas Air.

It’s immediately noticeable that the plane is unique to the company. The body of the Amazon One, the first in Amazon’s new cargo plane fleet, features the number 1997 (the year the company went public), and the tail numbers of all of the planes are going to be made up of prime numbers. It also, of course, features Amazon’s signature smile logo.

By increasing their own transportation capabilities, Amazon states that they have more capacity to meet their customers’ needs. The new capabilities will hopefully increase customer satisfaction, especially as customers expect quicker and quicker delivery dates.

At this rate, it’s going to be difficult for anyone to compete with Amazon’s delivery capabilities. However, the company isn’t stopping here. Amazon users can also look forward to the unveiling of Flex, Amazon’s mobile app that will allow freelance drivers to use their own vehicles as methods of transporting Amazon.com deliveries to customers. The company also plans on using robotics and other forms of technology in order to speed up the delivery process.